Before getting off trail to resupply at Sonora Pass we faced a 10,000 feet climb.  The volcanic surroundings were beautiful. The white of the snow made a deep contrast to the dark reddish purple scree and as we slowly traversed up the steep snowy mountainside more and more rows of white-toped mountains began to peak over the horizons. At the top we were left with breath-taking scenery but I was happy to see the mountains ahead didn’t seem as high or as white. As beautiful as they are in the distance, it’s a whole other story walking through them. 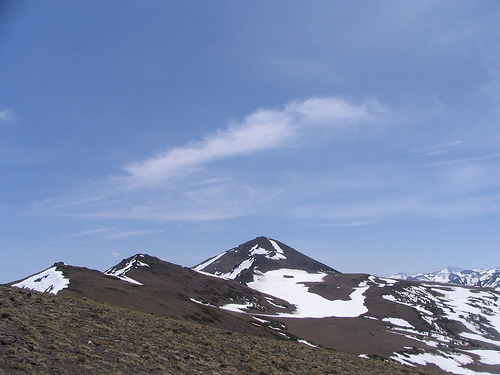 In short, I was done with snow.

Snow that glitters in the sunlight

And we haven’t even done any glacier walking! But we did have some nasty suncups on the way down the mountain. But we got a hitch immediately from Sonora Pass, enjoyed a yummy meal at Kennedy Meadows North courtesy of Auntie Kathy & then got a ride back to Sonora Pass from a friendly woman who worked at the resort and is planning to climb Mt. Whitney in July (a much better month to do it than June!).  There we camped with Kurt – whose new trail name is Rogue – and dreamt of a snow-free trail.

Since the PCT Atlas hasn’t been published for this section yet (at least not the 2nd addition) we’re using the Wilderness Press guidebook & data book for this northern jaunt. We really miss the Atlas. The geographical and historical tidbits the WP book offers are interesting but the maps are awful and difficult to correlate with the written descriptions.

The descriptions of the trail remindme of a “Choose Your Own Adventure” books. You know, the ones written in second person where if you decide to enter the cave you turn to page 24 and if you want to follow the river you go to page 19. The Wilderness Press guidebook is just like this… only you don’t have any choices. It reads along the lines of: “You follow the trail northwest, pestered by flies. As the trail archsto the east you want to stop, but press on since there are no camp spots.”  But I want to tell it, “What a second, Mister! First, I’m not being pestered by flies and second, I will stop now and rest thank you very much!”

Anyhow, we were interested to read in the guidebook that you could run into snow above 5,000 feet if you were hiking before June. Which we were… And on Day 45 we did indeed begin to see some snow. Big slushy patches and snowmelt galore. The entire trail was literally a river at some points. It was lovely and refreshing after dry SoCal. We even saw a cute teenage bear scramble up a tree ahead of us but it scampered off before we could take a pic.

But as evening approached and the trail crossed over to the north side of the mountain, we were faced with an unreal amount of snow. There was a solid 5 to 10 feet of snow everywhere… the only dirt visible was along the base of the evergreens and bushes and we soon lost the trail completely.

Thankfully there was a dirt road just below us so we tumbled down the snowy hill for ease of navigation. In fact this road paralleled the PCT for the next 20 odd miles so we figured taking that would be a quick and easy way to get through these snowy patches. We camped on a small patch of dirt at Bartle Gap and the next morning Day 46 we began walking up the icy road which unfortunately kept forking, even though our map showed just one continuous road. We did our best to determine which way to go, but the end the road stopped altogether so we were forced to bushwack in the thick woods andthen ascend to the top of the ridgeline where we could just see the trail far off in the distance on the south ridge.

Looming ahead in all her snow-white glory Mt. Shasta seemed so close we could touch her. Exhausted we climbed the steep snowy ridge, avoiding eerie blue mini-crevasses and rock climbing on the southern side when the slope was dangerously steep. At last, full of excitement we reached dry ground. No snow, no bushwacking, no arduous orienteering! Our pace shifted from a crawl to a practical run. 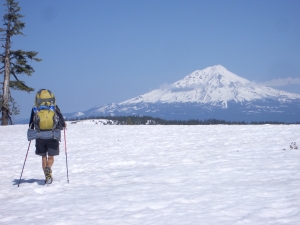 But ahead loomed snowy patches on the steep face of Grizzly Mountain. There seemed to be no choice but to keep going, but ice axes sure would have come in handy. One mistep, one slip and we would be sliding down an endless icy slide. With many prayers on our lips Dan carefully cut steps in the soft snow and I followed close behind. We had made it!

But our elation soon wore off as the trail veered north again and disappeared under a thick white blanket. Finally our wet feet and aching muscles rejoiced upon reaching a dirt road where we camped for the night. Just another manic-depressive day on the trail! The highs are so high, but the lows are so low. And how ironic to run into snow on a trip to help us avoid getting to the snowy High Sierras too soon! 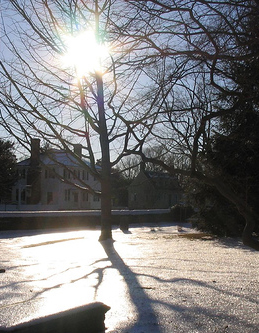 SNOW :: Last Monday we got over a foot of snow… everything was transformed into a winter wonderland. I was captivated by the blue shadows the trees cast on the serene snow. The snow gave Dan and I a chance to practice “self arrest” with our ice axes. Self arrest is basically jamming a special ax into the snow or ice to stop yourself from sliding down a mountain. It’s an important skill to have when crossing steep snowfields. And since Dan & I are starting the PCT a month or two before most thru-hikers, we could encounter a LOT of snow. So it’s a good thing we got some practice in the trecherous snowy mountains of Reston. Yeah…

SPRING :: But less than a week later it was sunny and 70!  Over at Dehydration Station we discovered that Plum Sauce takes ages to dehydrate and then becomes as sharp as glass. Seriously, I have a Hoisin cut on my finger!  And drying spinach made the entire house smell like wet dog. Let’s just hope it doesn’t taste like wet dog. We even managed to escape PCT planning to see some friends (including two adorable babes!) and catch up with my bro Sammy who was home for spring break.