August 13th– This shall ever be remembered as a day of great victory in the battle against the Welsh Weather. On a tip from Elise we red rover-ed it to Llanddwyn Island in Angelsey for a day at the most beautiful beach in Wales. Granted, it was so windy and cold I ended up wearing 2 jackets and gloves during our time there, but it was SUNNY! On the horizon, the shimmering sea met the blue outlines of the mountains of Snowdonia. I couldn’t help gazing at their lovely contours, but nevertheless I was glad to have a safe distance between myself and these mountains, that had lured me and then betrayed me time after time. And the clouds and rain that engulfed them reminded me of their treachery and made me all the more thankful for the glorious rays we were currently savouring.

The pursuit of sunshine brought us to Llanddwyn Island

It really is one of the most amazing places on the planet. You’ve got beach & mountains, forests & meadows, sea & sunshine, rolling hills & steep cliffs. I figure once global warming gets worse and it’s actually warm enough to swim in the sea, it will be virtually perfect. (Just kidding, you environmental wacos, I’m against climate change, too.) LLanddwyn Island is also called “Lover’s Island” though it doesn’t seem a very apt name considering the story behind it. Basically the engagement of this 5th Century Welsh princess to her lover went wrong (there’s various versions) and so she spent the rest of her life as a hermit on Llanddwyn Island. Happily ever after? Not quite.

But at least we enjoyed a happily ever day.

August 14th – Today we didn’t even give the mountains a second glace. (We saw they were covered in clouds at first glance.) So, with a vague recollection of a hill-top castle I’d see from the pier in Bangor, we set off to Penrhyn Castle. After a good hours march, mainly walking along a main road with buses whizzing by, we were about to give up hope of finding the castle when, at last, we arrived at an imposing gate in the wall. We made a day of exploring the castle and its extensive grounds, and even discovered a photography exhibit on abandoned manor houses in Wales, each of which I immediately wanted to track down and explore. Although I love visiting National Trust houses, I always find myself drawn to the closed doors and forbidden staircases. All of the roped-off rooms you can just peer into, only whet my appetite to rummage around in drawers and do some proper exploring. Perhaps I’m just hoping for the wardrobe to Narnia or the discovery of a secret passageway. 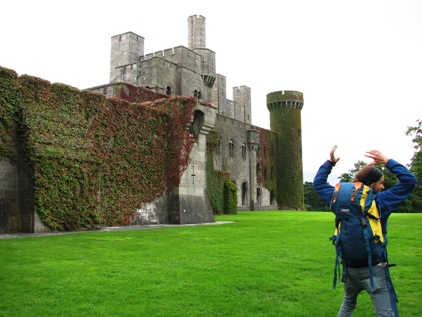 The real tragedy of Penrhyn Castle, though, is that it was funded by slaves on sugar plantations in Jamaica and underpaid Welsh slate miners. Let’s face it, most luxurious and extravagant items only exist because of vast inequalities in the world. It’s easy to scold those who built castles on riches from slave labour, but how many of us are perpetuate injustice (and perhaps even modern day slavery) because of our desire for inexpensive clothes and coffee? Few of us would knowingly do this, but often we prefer consumer ignorance. Besides, the lives of West Africans working in coco plantations seem so far removed from the bright lights and sleek adverts of the café downtown. And yet they’re integrally connected.

August 15th– When we woke up and Dan suggested we head to the Carneddau mountain range I thought he surely must be joking. But, I had to admit, the clouds seemed less protective of the mountains today, and you could even see a few peaks. So, Red Rover got us to Bethesda (where we saw Penrhyn Slate Quarry– the world’s largest and still in operation) and we began our ascent. We spied Bangor below, and Penrhyn castle, and the sea. 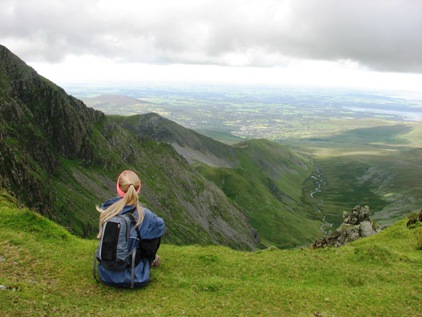 It was a gorgeous day and I even shed my winter coat for a while. We saw wild horses and ridiculously woolly sheep high up on the steep slopes. As we got to the third peak, the clouds got lower and lower until we were amongst them and it began to rain. But miraculously, the rain only lasted about 10 mins, and then the clouds, discouraged at our victories, dispersed. Once we were on the mountain ridge, the going was fairly easy and we managed to do 6 3000ft + peaks. The descent took us down a cliff heavily laden with heather. The path was treacherous, steep with loose rocks, but we didn’t mind going slowly because the view was so breathtaking. Our love affair with Snowdonia was renewed… but tragically we’d be leaving the next day.