Day 83 We arrived at Thousand Island Lake where we fought off an aggressive marmot at dinner and met up with Andy & Jean Michele. Day 84 it was horrid post-holing up Donahue Pass to enter Yosemite National Park.

Day 81 Mammoth is an upscale ski resort town with cute (and more importantly FREE) trollie buses that go around town.  On the way to town we passed by the impressive ski resort, which had actually just closed for the season the day before. The weather was cold & rainy which everyone constantly remarked was SO unusual for this time of year. Thanks, everyone. I know, I know, usually the weather’s sunny and 75 right now. Thanks for reminding me that I’m the lucky one who is here the one year that the weather in June SUCKS.

But thankfully the library in Mammoth is AMAZING and actually had high-speed internet. And some generous friends of the family – Debbie & Bruce – had offered to host us for the night. Debbie picked us up from Mammoth and drove us to their lovely home by Lake Crowley. Amidsts the rain and clouds we could see lots of fresh white snow on the high mountains to the west… delightful! We enjoyed chatting with D&B and making Shrinky Dinks with there 2 adorable boys before crashing for the night.

The next day Day 82 it was due to rain all day so we took a second 0 and drove with JM up to Echo Lake in a rental car so he could retrive a box he’d mailed there but needed now. The drive along 395 north passed Mono Lake and Bridgeport. It was beautiful but also a bit surreal to be arriving at a place in a few hours and knowing when we repeated the journey (on foot) it would take us over a week. Even stranger, after a day of sitting in the car I felt more exhasted than a 20+ mile day of hiking. Even my muscles ached. It was good to be getting back on the trail that night, even if it was just to camp.

Day 79  Across some ICY cold rivers and then up and over Silver Pass in driving snow and by Day 80 we had arrived at Red’s Meadow where we camped with Vincent & friends and enjoyed the free hot springs. Oh to be warm! Those days of overheating in the desert seemed like a lifetime ago!

It was a sad night around the campfire as our group of 6 was seperating. Indi & Adam would be headed back on the trail the next day but Dan, Andy, JM & I were headed into Mammoth. The good thing is we were learning that “good-byes” on the trail are usually “see you laters.”  So with a “hasta luego a dos” the 4 of us we took the bus into Mammoth the next day.

Day 72 to day 78 – June 6th we headed back over Kearsage Pass. Our group had grown to now be Andy, Adam, Indi & Jean Michael. Half American, half European. Half boot wearers, half trainers. Half with “A” names, half with names from later letters.

Andy, from the UK, would entertain us with stories of the Continental Divide Trail (CDT), British accent impersonations and his hunt for edible plants. Adam, from Oklahoma, would tell crazy tales about being a Marine and a child cowboy in his southern drawl, and was a veritable wealth of film knowledge. Indi, from the Seattle area, would beat-box along the trail, telling us of his family’s Alaskan adventures and wicked college pranks. Jean Michael, a retired quintessential Frenchman, would be eagerly asking when we’d come across a restaurant and constantly consulting his GPS.

Together we traveled over the snow covered passes of Glen, Pinchot, Mather, Muir and Selden. We helped each other navigate the trail-less terrain, alternated who cut steps in the snow and glissaded (like sledding without a sled) down a few lovely hills. More often than not, though, we were post-holing, not glissading. It was slow going. After a dozen miles we were dead tired.

Every day we faced precipitation – rain, snow, hail. But every day we also had at least a few brief moments of sunshine. I managed to break one of my hard contact lenses, so when it was sunny & snowy I had to don both my sunglasses and glasses to avoid snow blindness. Oh so hip!

Mostly it was cold. Only in rare moments did I bare my arms. And some of the stream crossings were so bone-chilling it made us groan in agony.

The sights were breath-taking… layer upon layer of mountains so jagged they looked like they’d rip open the sky. Deep green valleys with boggy meadows and cascading waterfalls blackening smooth granite rocks. We’d sing Flight of the Concords songs and talk about our favourite films. We chatted over bondfires in the evening to warm up and dry off. The scenery was stunning but we were we thrilled to finally arrive at VVR on June 12th. 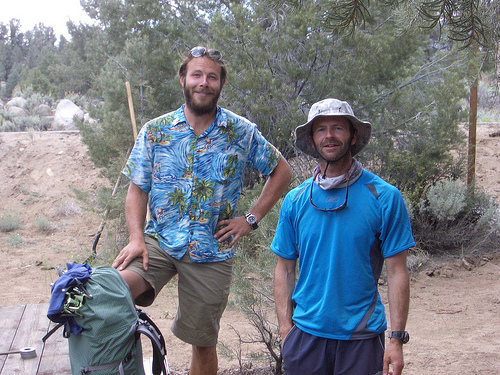 Day 64 The High Sierras were a different universe to the desert we’d been hiking in. Water was everything, though I was surprised at how little snow there was at first. We saw evidence of snow only recently melted, however, in the bright red waxy snow plants that protruded from the saturated soil. The high altitude made us feel breathless and light headed, like 2 teenagers in love or kids at fat camp. Today we bumped into Andy, who’d just did Olancha Peak, and hiked & chatted with him for a while. He’d been hiking with Adam and they were still planning on doing 10 more miles so we doubted we’d see them again but the next morning Day 65 we saw Adam & Andy, who would be our hiking companions over the next 2 weeks. We fell into a great rhythm… sometimes we’d hike together, sometimes we’d hike on our own but we’d camp together and in the days ahead tackle the difficult snow-covered passes as a team. That night we camped at Chicken Spring Lake and got some closer glimpses of the mighty snowy mountains ahead. Day 66 we left the PCT to hike to just before Timberline Lake so we could climb Mt Whitney the next morning.