Its time to start reading gear reviews, ordering planning guides, dusting off the dehydrator to experiment with new menu options, and step up the training.  In June we plan to fly out to the Canada end of the Continental Divide Trail and  start walking to Mexico.  Crazy? Maybe… but when this guy finished the 3000+ mile hike, he turned around and went all the way back.  Now that’s what I call crazy! Excellent short video – Francis Tapon definitely has good juju! 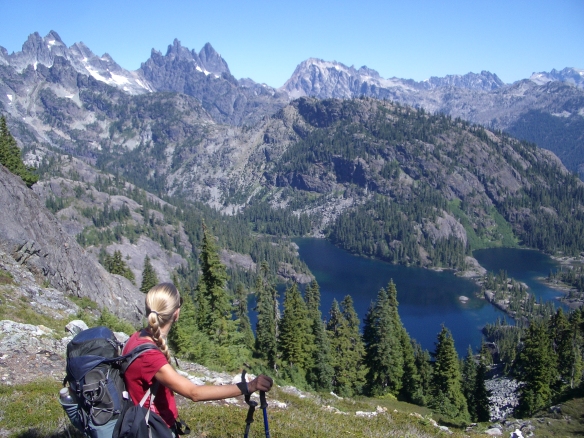 Day 151 – 153 Our greedy eyes devoured the scenery from our ridge-topped trail as we traveled through the Alpine Lakes Wilderness. And our stomachs devoured food we yogi-ed from city slicking backpackers. The term YOGI comes from the picnic basket-stealing Yogi bear and refers to whenever thru-hikers obtain free food, supplies, etc from others they meet along the trail. Yogi-ed food is the YUMMIEST because a) you didn’t have to carry it  b) it’s usually extra so you don’t have to ration it and c) it adds variety to what can become a tedious diet of dried everything d) it’s free! 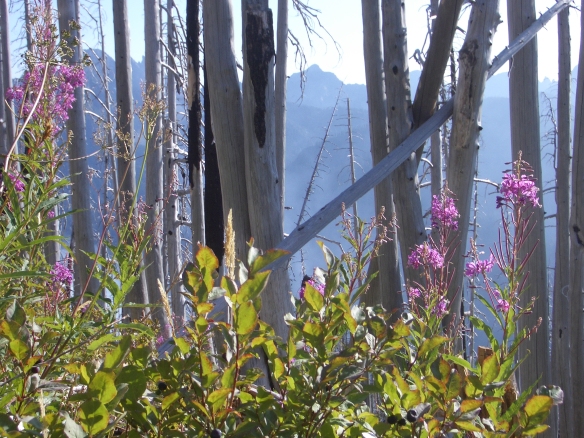 There was a little fire we had to go around but it wasn’t bad at all, just a few miles on another trail.  Afterwords we faced a hot ascent though a burnt area ablaze with the pink blossoms of fireweed. It was like experiencing some strange “circle of life” to be seeing dead trees ravaged by a previous fire, a fire currently smoldering and then the new growth of a flower that thrives in ashy soil all at once.

We also had a cool experience of seeing 2 young bucks together – and then again as we went up a switchback. Hiking with Rafiki was great because as a Wildlife Technician he knew so many interesting tidbits about the flora, fauna and animals we encountered along the trail. It was like having a guided tour through a living museum.  And then there was Reddy who’d explain complex computer capacities and play games on his cell phone at breaks. Get Reddy & Rafiki together and they bickered more than an old married couple… they even argued about things they both agreed on (but it a totally playful manner).  Good times.

Drying out our gear

Day 150  8/23/09 – We arrived at Snoquolomie Pass where we met up with other thru-hikers Burning Daylight, Jean Micheal, Slim, Berkley Bill & met Foxtrot for the first time. Foxtrot is insane. He’s been hiking practically full time since he graduated from high school over a decade ago. He works as a commercial fisherman in Alaska for 3 months max a year, then hikes the rest of the year. He’s done lots of hiking in remote areas of Alaska where he hires airplane pilots to drop his food. He’s seen around 50 grizzlies and even been charged by a few. The craziest thing is he’s a very soft spoken, unassuming guy – you’d never guess he’s so hard core.

Even though it hadn’t rained our gear was dripping wet from condensation,  so we dried it out in the parking lot and enjoyed munching on snacks from a bountiful hiker box.

Then DnA (that’s us) and Reddy & Rafiki headed back to the trail where we were inundated with day hikers.  After an informal suvey we determined that 97% of the day hikers were from Seattle and that out of that 97% another 85% worked for either Microsoft, Boeing or Starbucks.

Even though I don’t enjoy a crowded trail I could see why it was such a popular area. Just a hop, skip and a jump away from Seattle the Alpine Lakes Wilderness is magnificent!  Plus the crowds thinned out as we headed farther from civilization… and we enjoyed a cold but scenic camp between Gravel & Ridge lakes.