I just read Robert E. Simmon’s Reston Master Plan from 1962. It’s fascinating….  overall Reston has turned out according to many of his plans… no cemetery or riding stables, but lovely paths, open areas and recreational opportunities. Bob pushed for woods rather than “useless front lawns” which still holds true… to a degree. Sadly, rather than the bustling paths and walkways he envisioned, it’s often traffic-filled streets. Good thing traffic isn’t a problem when you’re biking!

With the Silver Line metro headed to Reston in just a few years, more changes are on their way fast, so now’s the time for those of us who live, work or play in Reston to get involved. And to start with, Reston Residents make sure to vote in the Reston Association Board of Directors election – ballots will be mailed March 7th and candidate statements are available here.

So Lake Anne and Portofino, have a few slight differences…. but with new Greek and Thai restaurants and a new cupcake joint, Lake Anne is pretty sweet. 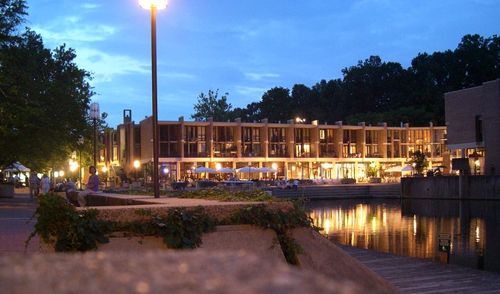 June 25th – With a shriek I jumped into the Sun River and was out again before the bone-chilling water turned me into a Popsicle. We were on our way to Benchmark, a small guest ranch where we’d be picking up food we’d mailed from Virginia.  Poor Yas was feeling sick and so after dropping off our packs at a campsite I stayed with him while the others walked down the road to pick up the supplies. After waiting ages for the other to return, Tim & Dan finally arrived – in a huge pick-up truck.

Apparently they’d gotten 2 different hitches to & from Benchmark from men who turned out to be friends and now we’d been invited to their cabin.  Tom Dooley, an octogenarian who referred to his 60 year old neighbors as “girls,” looked like a cross between a truck driver and Santa Claus.  His log cabin was epic – covered with gigantic moose, elk and deer head, boasting a roaring campfire and plenty of beer and candy to go around.  Dooley’s friend Barry (with dog Yogi) was also a gracious host. The other group of thru-hikers we’d be hop-scotching with (Rolling Thunder, Mike with a Y, Don’t Panic & Wing It) had also found their way to Dooley’s, thinking it was Benchmark.

This was trail magic at its best – spontaneous, unexpected, generous and filled with amazing conversations. The “girls” next door joined us around the campfire with their grandkids for s’mores and told us of their Scandinavian ancestors who had started homesteads in the Montana backcountry. Dooley was a wheat farmer from Great Falls who had done well but retained his working class roots. He was a true legend, the so-called “Mayor of Benchmark” and a first-rate CDT Trail Angel as well. 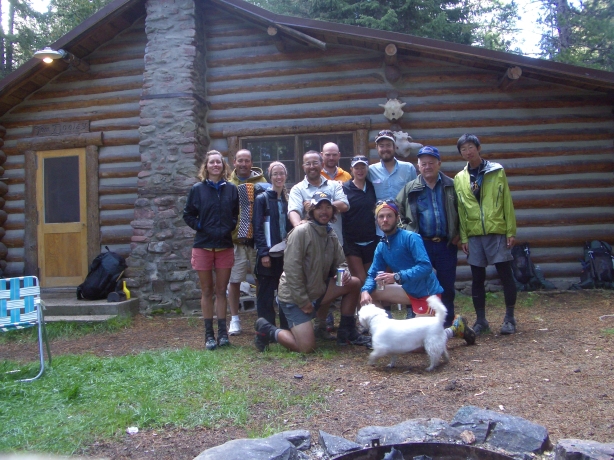 This weekend I’m headed down to visit my Alma Mater W&M. I’m praying I won’t freak out too much about all the new buildings and such. It’s always hard to see a place that is wrapped up in beautiful memories change.

Then I’m going to Peace Hill. Peace Hill was my church during my 4 years at W&M and is basically the coolest wannabee Christian commune out there. There are a lot of young people and families who have formed a great community around the home-built church/barn. Plus, they put in a pool! (See, I’m not opposed to all changes!). And they have delicious pot luck meals every Sunday after church. Thankfully our current church, Georgetown Community Church, is very similar and has that same cozy feel.

Then, my dear friend E and I are going to Assateague Island. That’s where they have all the wild horses!  Woo hoo! I’m totally craving beach time! Just pray we’re not eaten alive by moscitos!

Meanwhile….Dan is in Palo Alto, California (my old hometown!) getting ready to head off into the widlerness to lead a backpacking trip for incoming freshman at Georgetown University.