7/21 – We just had 7 easy miles until Bannak Pass where we would hitch into Leadore to resupply. Unfortunately the so-called “highway” we had to hitchhike on was a dirt road in the middle of nowhere. We had heard of hikers waiting hours for a single car to come down the dusty road so we set off with extra food and water, preparing for a long wait. The good thing about a dirt road, though, is that you can see cars coming from a long way off because they create a massive cloud of dust in their wake. As we approached the pass we spied at least 2 duststorms, but they were headed in the wrong direction. When we finally arrived at the dusty turn-around amidst miles of sagebrush a huge white truck was approaching – but once again headed the opposite way. Nevertheless, Found stuck out his thumb and I was surprised the see the truck pull into the pass and hear a familiar voice yell out the window, “Hey hiker trash!” 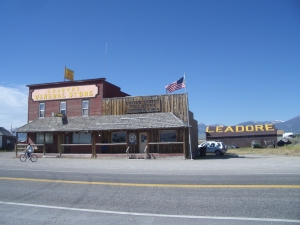 It was Wing It & Don’t Panic! They’d just been in Leadore and had gotten a ride back to the pass from the town sheriff and hotel owner.  He was just dropping them off and then heading back to Leadore – unbelievable!  Giddy with our good fortune we piled in and soon arrived at Leadore which consists of a handful of houses and trailers, 2 conveniance stores, 1 restaurant, a post office and a rodeo stadium/park/campground.I love these little towns! They make it so much easier to relax! We camped at the rodeo combo area and despite some crazy western weather (simultaneous rain, sun, clouds) we enjoyed a  lovely campfire with s’mores and a cozy nights rest in our hubba hubba tent.