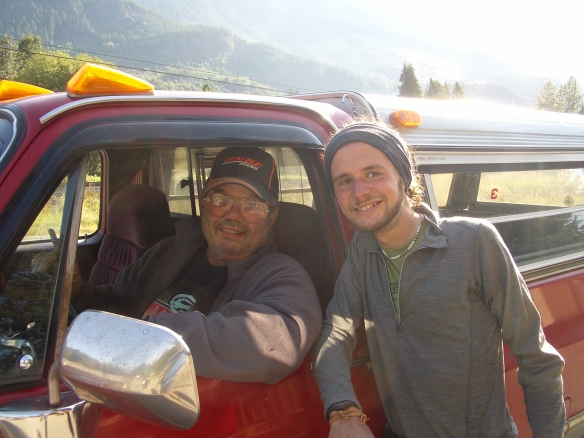 Day 153 – August 26 we arrived at Steven’s Pass where we hitched into Skykomish and met the lovely Dinsmores – the lone Trail Angels of Washington. We met Jerry Dinsomore at the Post Office and rode with them to shower & do laundry at their riverside home. Unfortunately, though, the Skykomish river is changing course so they have to move. But the good news is they’re building a whole Hiker Hostel down the road in Baring. Jerry has a round figure and a cigar permanently afixed to his mouth (except, of course, when we took his photo). He definitely fits the bill of the logging trucker he once was.  Angela Dinsmore is charming woman who insisted on hugging me even though I was filthy.  I even got to wear her grandmother’s fantastic purple dress.

At the Dinsmores we met some other hikers: Batman, who had a nasty infected spider bite, and Double Barrel & Frank the Tank (a girl), a couple from Rhode Island. DB & Frank had skipped up to Washington from NoCal and were a lot of fun so we were sad to hear they were getting back on the trail the day we arrived. Burning Daylight also arrived and told us Jean Micheal, the Frenchmen we’d hiked with in the Sierras, was getting off trail. We were surprised to hear it but apparently his knee had been bothering him and I think he just wasn’t enjoying himself. Crazy, though, to quit only 200 miles from Canada! We also met Big Foot, an older section hiker and saw Foxtrot again. We took a zero on Day 154 and enjoyed chilaxin’ and watching videos in the garage/hostel. But goodness was it HOT!